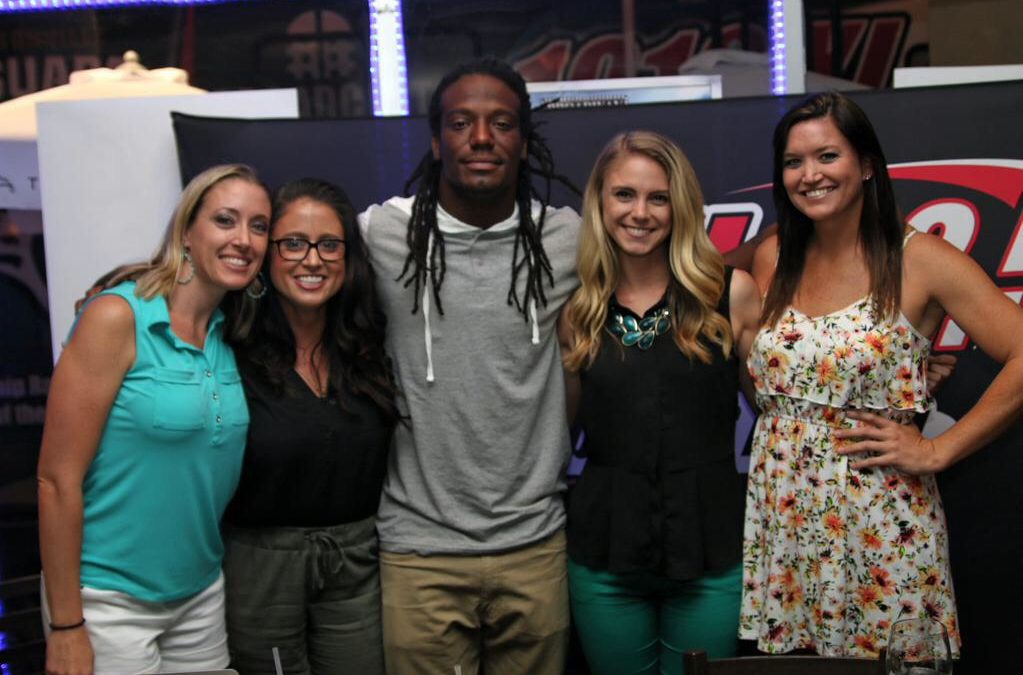 Jaguars safety Sergio Brown talks DeflateGate and joined the ladies of Helmets and Heels live on location to discuss the challenge of facing his former teams over the next two weeks, his role in the Tom Brady scandal, and the Disney princess he fancies.

Former Notre Dame safety Sergio Brown went undrafted before the New England Patriots signed him to the practice squad in 2010. Brown made a name for himself when he was promoted to the 53-man roster a few weeks later but in 2012, his time with the Pats came to an end. AFC rival Indianapolis Colts quickly scooped him up where he played with the team through the 2014 season including their infamous DeflateGate matchup against the Patriots.

The Jaguars signed Brown in 2015 where’s he already made an impact on the team by recording nine tackles and half a sack.

During his interview on Helmets and Heels, Brown was asked about the challenge of facing his two former teams over the next couple weeks:

“I always say it’s a great blessing to be in the position, to be here [in the league] long enough to do it. Someone would be lying if they said it doesn’t feel different or if it’s a little extra motivation. It’s impossible for me, at least. I always try but if there’s a little bit of extra motivation it just makes it a little more exciting for myself.”

The matchup against the Patriots biggest offensive threat in Rob Gronkowski proves to be particularly interesting given their history. But when it comes to game planning, Brown is more concerned with the entire Patriots team:

“Gronk, Brady, Edelman and Belichick are the best in the game and defending champions. The biggest thing when you’re playing those guys is you gotta bring a whole bunch of passing to the field. They say scheme is great but coaching can beat scheme so regardless of whatever game plan you have, if you go out there and you believe whole-heartedly and execute, you can go out there and win.”

“The players on the field is what wins the game when you play a team like the Patriots. Bill Belichick is able to put you in so many positions and matchups that you really gotta man up and take control of the game.”

We then moved on to a game of Word Association that got a little interesting when we said, “DeflateGate.”

Because Brown was the starting safety for the Colts going up against the Patriots in the AFC Championship game, he played a major role in reporting the deflation issue to the referees. After several players around the league said they have never noticed if a ball was over-inflated or under-inflated, Brown hinted the Colts noticed immediately:

“After we got an interception in the second quarter it was, ‘Oh, this football is soft and easy to catch.’ So what’s going on? And whatever happened after that, happened.”

H&H: What happens after a situation like that? Do you tell your coach and then someone else?

After quickly moving on from DeflateGate and because of his time with the Pats, Colts and now the Jaguars, Brown was also asked how each of the locker rooms compare:

“You can imagine what it’s like in New England. It’s not fun at all. It’s like work, definitely work. In Indianapolis it’s more like a players’ locker room with some vets on the team and a good diversity of people, ages, coaches, everything. It was different in that everyone was like family but coaches and players were still separate. But here [in Jacksonville] everyone is together and it’s a real, real cool, great culture. I compared it to a business like Google where they’re more innovative and really take care of their employees and players.”

There were numerous sound bites from Brown’s interview you can hear below to include the reason for Reggie Wayne’s difficulty in New England, why he likes to talk so much trash on the field and which Disney movie he watched as recently as two weeks ago.

Oh and of course, we had Sergio perform his famous Ric Flair impersonation to close it out.

Listen to the full show below…

Highlights from the show

Intro: Recapping the unexpected Jaguars win against the Dolphins.

19:28 Kam Chancellor wanted his teammate Michael Bennett to hold out with him, but his wife wouldn’t “let him.”

24:18 Marshawn Lynch’s mom calls for Seahawks offensive coordinator to be fired. Is her opinion valid or should she leave it to the experts?

28:19 Sergio Brown joins the show and jumps into his preferred social media accounts, his favorite TV shows and which Disney princess he fancies.

39:15 Sergio talks football on the field and facing off against Pats/Colts.

55:21 Sergio breaks down the safety blitz that led to his half sack vs. Miami.

57:44 Realistic expectations for Jags vs Pats.