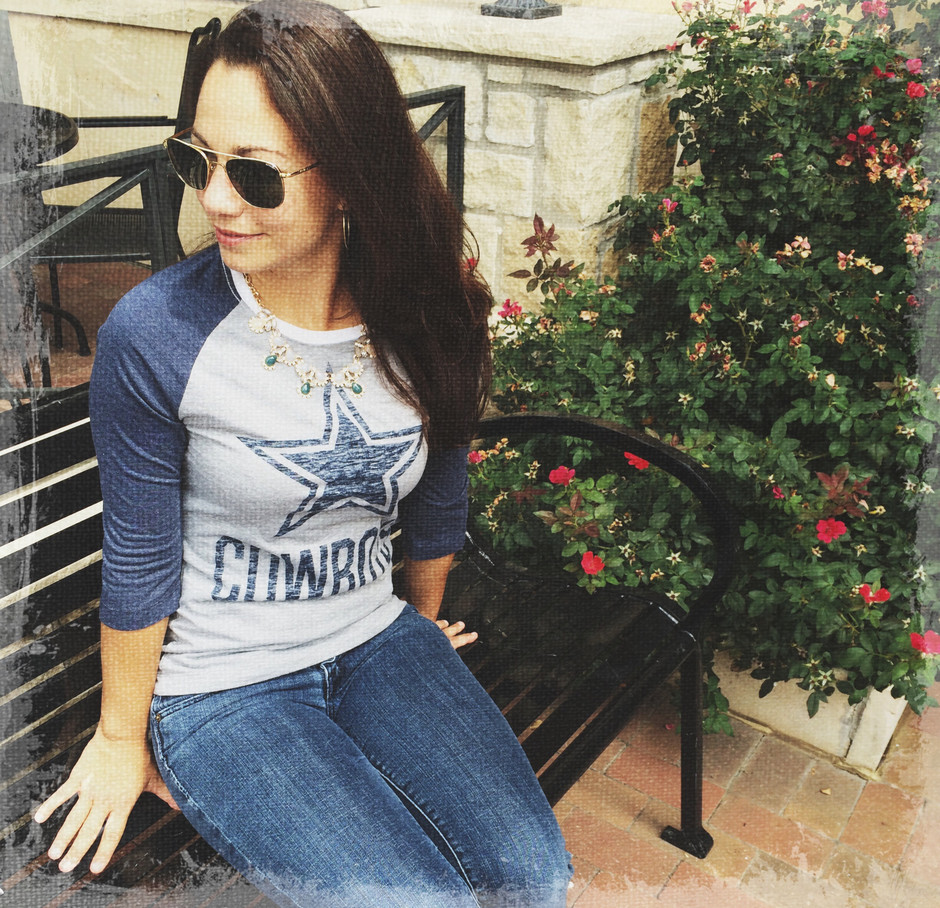 Jana Mathena is a former stylist and big time sports fan who founded her website Gameday Cloth in late 2009. Her line of clothing caught on so well, she opened her first brick and mortar store in 2010 in Plano, Texas, catering to fashionable sports fans. With a second opening in Austin, Texas in 2013, it’s safe to say Mathena continues to speak the language of the fan.

When asked where she came up with the idea for her website, Mathena responded with “I’ve spent the majority of my career in fashion, but I also happen to be a huge sports nut. I don’t understand why we look so cute every day and then throw on a generic “beefy tee” for a game. Or worse – I think – is a shrunken, pink, rhinestone jersey. Gross. So I went in search of the best product in the highest quality and started my company from there.”

GuysGirl: Do you tailgate regularly for football games?

Jana: Absolutely. I went to SMU and have had season tickets now for years. My fiance (also business partner) and I joined with a group of our friends and rent a tent on The Boulevard. There used to be a billboard near campus that read, “We don’t tailgate. We Boulevard.” It’s an experience like none other. The closest thing out there is probably The Grove at Ole Miss.

What’s your absolute favorite thing to make for a tailgate and/or Superbowl/Bowl game?

I’m diabetic, so I’ve actually made it my mission to find good food that’s still game worthy. We host the Super Bowl at our house every year and I finally believe I’ve perfected the food. I make a cauliflower buffalo “chicken” that disappears. As well, a healthy dip and dessert. I prefer a Greek Yogurt version of Cake Batter Dip with Sugar Free cake mix and a Mexican-inspired Weight Watchers dip of Greek Yogurt, salsa, fresh avocado and cilantro and extra seasonings.

Do you play any games while tailgating? If so, what do you play?

The kids are always playing catch, which turns into tackle every now and then. And we, of course, play Squares at the Super Bowl.

Do you cook food on site or do bring food from the house or a restaurant to tailgate with?

We bring food with us to the tailgate. It’s too hard to wait for a grill to cool off for transport or to put away in the car before the game. So we rotate each game amongst the wives and girlfriends, basically. Of course, one of the dad’s brings JD Chippery cookies to every single game. They are a Dallas staple.

What does a typical gameday routine look like for you?

I have two versions of a gameday – working or day off. If I’m working before the game (only allowed if it’s a night game), I’ll get dressed in my Gameday gear before work and count the clock. I bust out as fast as I can, park at home, grab an Uber to The Boulevard and try to allow at least an hour to enjoy with my friends before the game.

If I have the day off or it’s an earlier game, there’s usually brunch involved (which is a weekend staple for my fiance and me), grocery store/kitchen time to make the goodies, grab a koozie, switch to the game purse and don the appropriate game day attire. And that is obviously something we both plan out ahead of time, being that we own a sports-centered store/website. Then it’s a good 3-4 hours of tailgating before we head into the stadium. We go into the game late, because I make us stay until the very end to sing the Alma Mater with the team and band.

Where do you usually watch your favorite team in action?

At Ford Stadium. We aren’t on TV that much, but Lakewood 1st & 10, a local SMU-alum owned sports bar, will usually play the games.

What’s your favorite thing to drink while tailgating?

I mainly stick with Miller Lite, unless it’s a day game. Then I pair my diabetic version of a mimosa with my breakfast tacos. A dry, non-sweet sparking wine (my favorites are Cristalino or Freixenet) mixed with Trop 50.

Describe your typical outfit at a football game. Do you dress for comfort, style or both?

Absolutely dress for both. I’ve created an entire business on being able to do both. So 100% of the time I’m wearing something from Gameday Cloth. When it’s super hot in August I have to wear shorts or maybe a dress. I hate sweating, so it has to be something that won’t show my discomfort to the rest of the stadium.

My favorite outfit this last season was a pair of my own James Jeans skinny jeans, mohair Steve Madden moccasins, a Retro Brand scoopback, Slater Zorn cashmere wrist warmers, a Slater Zorn resin long necklace and my Randolph Engineering sunnies. I felt so good that day. 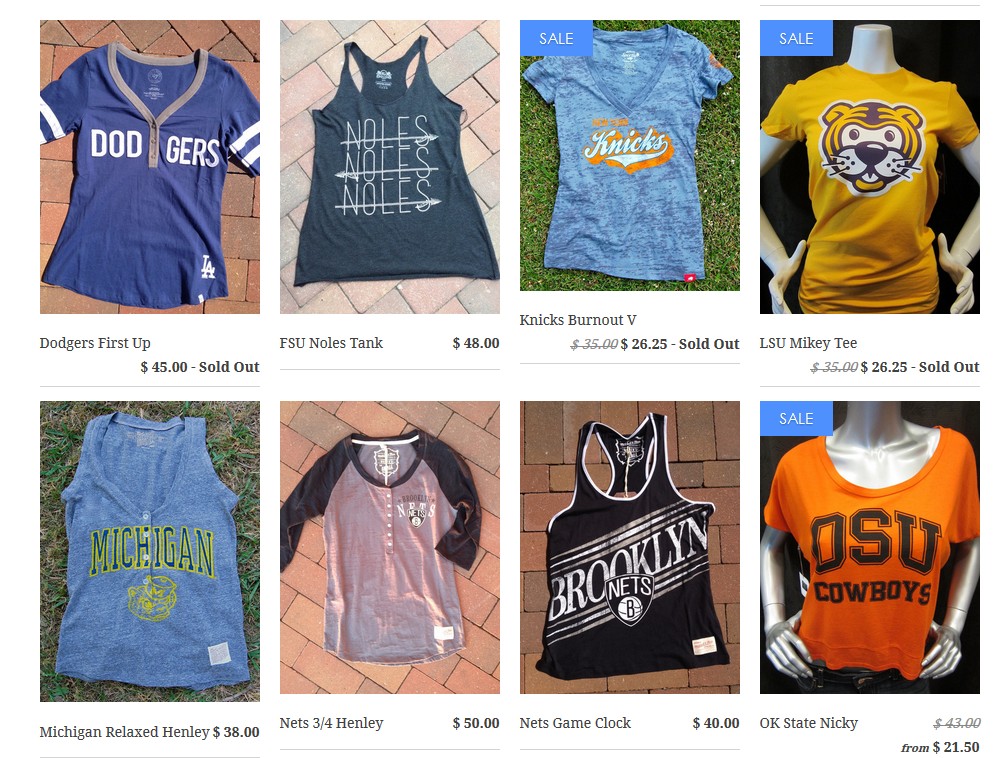 When you coordinate an outfit for gameday, how long does it usually take?

I studied and worked as a stylist as well as personal shopper before opening the store, so I’m pretty comfortable and quick at pulling something together. I never like to completely match. I like a contrasting color or pattern thrown in. You have to represent your team, your own personal style and feel comfortable if you end up grabbing a bite after the game. Head to toe body paint would look a little ridiculous sitting for dinner somewhere.

Do you paint your nails using your favorite team’s colors? If so, do you paint them as normal or attempt nail art?

I keep my nails painted all the time, but they’re usually grey or black. I think that works with anything, no matter what the event or what I’m wearing.

Where are you favorite places to get gameday clothes?

Of course, Gameday Cloth. I really couldn’t say anywhere else.

What’s your favorite thing to wear at a cold game?

I love layers. Wearing a traditional sweatshirt with skinny jeans a boots, but with a leopard scarf. Or leggings with boots, big colorful boot socks, a long tank, cardigan, sweatshirt, jacket – tons of layers.

What’s your favorite thing to rock at a hot game?

Shorts, flops and a ponytail! The rest is interchangeable. It gets HOT down here in Dallas.

If you could only bring 3 things into a football game, what would they be and why?

Sunglasses – I think they complete an outfit, but also, you have to be able to see the actual game taking place and squinting doesn’t look good on anyone.
Koozie – I have to keep that beer cold in the hot summer or keep my hand from freezing in the winter.

Comfortable shoes – A comfortable shoe for me can be a flat, a flop or a heel. As long as I can stand in it, run in it and jump up and down, I’m good.

What do you think is the most difficult part about the game of football for a newcomer to grasp?

It’s hard to understand the announcers so knowing what the officials are motioning. Otherwise, you have no idea why one team is moving farther back or closer in based on a call.

What would you personally like to learn more about when it come to football?

I don’t understand routes. I have no idea if a missed pass is the fault of the receiver or the QB because I don’t know where they should have thrown or run.

Did you learn the game of football on your own or did someone else have a hand in helping you learn?

I grew up in a football home. Meals, chores and church were scheduled around my Dad’s teams’ games. And my little brother played from PeeWee through high school, with my Dad coaching when he was smaller. We all know football.

Do you play fantasy football at all? If so, what do you like most about it?

I just played my first year of fantasy football!! I loved it. Setting my team, seeing the scores run. The competition is the best!

The percentage of female fans of the NFL stands at 45%. How do you think the NFL could grow this number?

I think football will always be a male-focused sport since the players are all male. But that doesn’t mean that there isn’t a big home for women. I think the stadium experience could cater to women a little more. Where are the hot male cocktail waters? Why is it always skimpily dressed females? And beer is so easy to find. What about wine? Maybe some healthier food options? Yes it would appeal more to women, but it would benefit everyone!

Who are some women in sports broadcasting/writing that you look up to and why?

Erin Andrews is amazing. I wanted to hate her when she first came out, but she knows her stuff, she gets the interview and now sits at a desk of all men and holds her own right with them. She blew apart the stereotype that a woman can only be pretty and ask simple questions on the sideline. Kudos to her.

What’s the biggest pet peeve you have about being a female sports fan?

Just because I’m a girl and I love sports does not mean I want to wear a “beefy tee” to a game. I am a fashion lover! I want to look as good at the game as I try to look in my every day life. And I DO NOT do shrunken, pink, rhinestone jerseys. They don’t look good on anyone. I want to rock a high quality v-neck or an off the shoulder style with a vintage logo – something I’ll want to throw on whether I’m at the game or not.